Not all amperometric oxygen sensors have a stable output current over time. For instance, most of the oxygen sensors used for safety applications tend to have a decreasing output dependent on the load. Those sensors must be operated with some care and cannot be used for critical applications such as for example controlled atmosphere applications, where a measured oxygen concentration needs to be accurate and reliable. Angst+Pfister Sensors and Power promote and manufacture only amperometric oxygen sensor products that has a guaranteed stable output current over the whole lifetime span of the sensor. And the lifetime is long – minimum 4 years of operation is guaranteed, but of course depending on the application. In the following newsletter, 3 stable oxygen amperometric sensors for controlled atmosphere applications are being presented. The sensors presented in this newsletter (Newsletter 1) form the basis for the Angst+Pfister Sensors and Power OEM oxygen gas sensor module products presented in the next newsletter (Newsletter 2).

FCX-U zirconia based, amperometric oxygen sensor with 4 measurement ranges
The FCX-U zirconia oxygen sensor are operated at 450°C, but at the outer surface of the sensor, the temperature is always < 60°C. Because of the high temperature of the small ceramic sensor element, the output current from the sensor is almost independent of the gas temperature between -20°C (-30°C) and 50°C. The FCX-U oxygen sensors measures the partial pressure of oxygen independent of the static pressure, because the current from the sensor is limited by diffusion and because the whole sensor element is subject to the total, static pressure.

The FCX-U series of zirconia oxygen sensors has 4 types, each with a fixed measurement range: 0-1000 ppmO2 (FCX-ULL), 0-5 Vol%O2 (FCX-UL), 0-25 Vol%O2 (FCX-UC) and 0-95 Vol%O2 (FCX-UWC). All types are heated to 450°C by resistive heating and the output current is controlled by the precise temperature of the sensor element and the sensor voltage across the sensor element. As an example, The output current from the 0-25 Vol%O2 oxygen sensor (FCX-UC) remain stable over 30.000 hours operation with a maximum drift per year and in air of < 1% relative/year. When reaching end-of-life (EOL), the output drift is accelerated to > 10% relative/month.

The sensor element is packed in a ceramic wool, which is an apparent advantage, when its comes to gases with high moisture contents and/or particles. The FCX-U sensors are very robust and can even be operated in corrosive gases, but with great care. The gas sample containing a corrosive gas must be very dry and the corrosive gas will for a fact shorten the lifetime of the sensor.

The FCX-U sensors can be used up 300°C, extendable to 325°C by careful design of the sensor head (cable and package). The sensors are often used as humidity sensors for high temperature operation, for instance in drying applications and for controlling baking processes. The output current remain proportional to the oxygen partial pressure, but since humidity is suppressing oxygen, the calculation of the humidity content in an atmosphere with an known oxygen concentration is straight forward. The use of the FCX-U sensor as a humidity sensor is the subject of another newsletter in this series of newsletters leading up to the ACHEMA exhibition.

PO2ES and ES1 weak alkaline electrolytic, amperometric oxygen sensors
>Liquid-, gel- or polymer-based weak alkaline electrolytes are becoming more and more popular for different applications, ranging from hand-held gas safety devices to complex additive manufacturing processing chambers. The reason for this kind of electrochemical sensors gaining popularity is twofold; stable output currents over the long lifetime of the sensors (4-6 years depending) and little or no cross influences to other gases such as methane, hydrogen and other gases – even when the gas sample to be analyzed is wet.

The PO2ES series of oxygen sensors has a weak alkaline, liquid electrolyte in a classical 3-eletrode configuration. A gas permeable diffusion membrane provides the interface to the gas sample. The oxygen gas is reduced on the sensing electrode (Cathode) and is oxidized again on the second electrode (Anode). The PO2ES series of oxygen sensors are lead free and by using the weak alkaline technology the sensors have very little or no cross influence to other gases

The PO2ES oxygen sensors can be operated up to 100%RH humidity and only has very small output responses to 100 Vol% gases or gas mixtures of carbon dioxide, carbon monoxide, hydrogen and hydrocarbons. This makes them very well suited for applications such as general gas safety (ATEX) & gas quality during generation, storage, transport and pumping (biogas, natural gas, propane gas and hydrogen gas). The PO2ES oxygen sensors can also e operated in a dry environment over along time, for instance when using dry nitrogen or argon to lower the oxygen concentration in a closed environment.

The ES1 series of sensors (20+ different gases) has the electrolyte immobilized in a polymer and printed with a paste on a ceramic substrate. The ES1-O2 0-25 Vol%O2 oxygen sensor has a weak electrolyte immobilized in a thick film printed 3-electrode configuration. A capillary tube provides the interface to the gas sample. The ES1-O2 is lead free and has little or no cross influences to other gases. The sensor has no orientation effect and is very well suited for hand-held analyzers and for integration into applications with limited head space volume. The output from the ES1-O2 oxygen sensor remain stable for wide over 25.000 hours of operation with a maximum drift per year and in air of < 2-5% relative/year. When reaching end-of-life (EOL), the output drift is accelerated to > 10% relative/month.

The ES1-O2 can be operated down to very low temperatures (< 30°C) without loosing too much signal and by protecting the printed layers and the capillary tube with a Teflon membrane, the sensor can be exposed to high humidity’s close to 100%RH. One advantage of the thick film approach is that the layers can be mixed according to application and in order to achieve the best performance in a given application. This has for instance been demonstrated in applications, where the ES1-O2 are supposed to measure a low oxygen concentration in a head space volume and for more than year. By changing the chemistry of the reference electrode, the inherent problems with the standard reference electrode were solved.

Summary
Whatever the application is, and in a broad range of concentrations from low ppm levels of oxygen and up 100% of oxygen, the Angst+Pfister Sensors and Power amperometric oxygen sensors are attractive from a point of view of ruggedness, operational lifetime and output stability – perfect for analytics as well as process control.

The amperometric oxygen sensors need interface electronics to function correctly and by designing the interface electronics a number of new requirements are to be met – the ES1-02 sensor, for instance, need a very stable reference voltage for an optimal performance of the sensor. The FCX-U sensors, as another example, need a stable heater voltage and protection against thermal shock from to high transients. The next newsletter (Newsletter 2) in the series of newsletters leading up to the ACHEMA exhibition, presents the OEM amperometric oxygen gas sensor modules in our product portfolio. 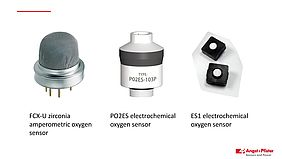