Angst+Pfister Sensors and Power has two types of OEM potentiometric oxygen gas sensors and gas sensor modules in our program – sensors/modules for inline, diffusion measurements and sensors/modules for forced flow measurements. The sensors for the inline, diffusion measurements can be designed for temperatures up to 1400°C. The most popular inline, diffusion sensor is the A19-N oxygen sensor that has an upper temperature limit  of 200°C and which can be easily screw-mounted and gas tightened into a process chamber or a process line. For forced flow measurements, the A19-P oxygen sensor is the obvious choice. The gas inlet (G3/8”) and gas outlet (G1/4”) design ensures a very fast response to changes in the oxygen concentration and no pressure build-up over the zirconia element.

The most popular application, among many, for the PZA-MC25-N potentiometric oxygen sensor module for inline, diffusion measurements is in additive manufacturing (AM) applications for controlling the inert gas conditions in powder bed based build chambers. The first measurement range (0-25%) is used for getting a good-for-go for the build job to be started, because the oxygen concentration is lower than a preset value for safe operation. The second range (0-1000 ppm) is used to control and monitor the oxygen concentration level during the build job. Most reactive metals, like titanium or aluminum, must be build in a very low oxygen atmosphere – preferably below 200 ppm O2.

One of the most popular applications for the PZA-MC25-P potentiometric oxygen sensor module for forced flow measurements is in metal powder atomizer/separator machine for securing oxidation free processing in a closed chamber machine. Because of the conditions in the chamber, the gas-to-be-analyzed is extracted and analyzed using the PZA-MC25-P product and with process limits as low as 10 ppm. The PZA-MC25-P not only monitors the conditions before start of the process; during the process it measures the quality of the process, for instance by being able to measure leakage into the closed chamber.

The mV output signal from the potentiometric zirconia oxygen sensors is highly non-linear, in fact it is logarithmic. The MC electronics linearizes the signal and deliver per default a linearized 4-20 mA signal. The linearization somewhat limits the useful oxygen concentration range and we do not recommend to use a measurement range in the linear mode better/lower than 0-1 ppm. For some applications, for instance those where a reducing gas can interfere with the oxygen gas on the surface of the zirconia, we recommend to switch to the logarithmic measurement mode. In the logarithmic mode the concentration range can be very broad, but the output signal is still 4-20 mA, but logarithmic. Switching to logarithmic makes sense, when a reducing gas reduces the partial pressure of oxygen on the measurement side below the ppb level. For instance in processes using a forming gas or for very precise measurements of oxygen below the ppm level.

All changes, be it an adjustment of the cable length between the sensor head and the electronics over a customer specific setting of the measurement range to a change between linear and logarithmic mode, is easily done using the Windows App and the Bluetooth connection in the electronics. Calibration, diagnostics and change of settings are all done in this way. All PZA-MC25-N/P are delivered with a very precise calibration and a calibration certificate, but it is recommended, and often needed, to make a adjustment/calibration in the applications. Small changes in pressure, flow or humidity can causes rather large deviations from pre-calibrated values. From the electronics unit, there is also the possibility of dumping the data into a csv file format by using the PC Software for logging. 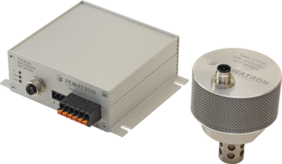 Front and backside pictures of the almost cubic OXYPA OEM paramagnetic oxygen sensor module; the backside (left) shows the electrical terminal block connection, the frontside (right) shows the in- and outlet gas connection ports. The signal adjustment ports (zero and full-scale) are also shown in the picture to the right.

PZA-MC25-P product consisting of electronics unit (left) and A19-P potentiometric oxygen sensor for forced flow measurements. Left on the electronics unit are the status LEDs (incl. BLE communication LED), in the middle the 4-pole connector for connection to the A19-P sensor head and to the right the terminal connection block for power and output. The A19-P sensor head has a M27 x 2 mm thread for screw mounting. The forced flow to the sensor element is entering through a G3/8” gas inlet connection and exiting through a G1/4” gas outlet connection.