Natural gas (methane) is widely used as a source of energy for heating, cooking and electricity generation, and is considered also as a fuel for vehicles. Natural gas is also very important for the manufacture of plastics, rubbers and other organic chemical products. The natural gas worldwide consumption is increasing and the quality of the gas is important for the different processes (for instance controlled burning). Equally important is the fact that natural gas can leak away from the intended application (enclosure) and can burn in free air. In terms of leakage, there are two major concerns; one is the contribution of methane leakage to global warming and the other is large leakages of natural gas, which can potentially burn freely and cause a lot of damages and life-critical situations. In this newsletter, we introduce the NGM_1 natural gas sensor module, which are ideal for detection of large leakages to concentrations close to the LEL level of methane (4.4 % methane in air).

The small sized NGM_1 module (30x65x9 mm) consists of a solid-state MEMS pellistor gas sensor, which is very mechanically robust and resistant to mechanical shocks and vibrations. The response to methane gas exposure is excellent (> 10 mV/% CH4). The standalone sensing element has been on the market for more than 5 years and is widely used in portable and stationary gas warning devices around the world. The gas sensor has undergone a slight redesign, and is in the new version fitted with a novel filtration technology, which removes effectively contaminants that can occur in commercial and residential environments. The resistance to common chemicals is superior to existing pellistor gas sensor technologies and this ensures a long lifetime of the module in the application.

Because of the sensor solid-state basis and the state-of-the-art electronics, the power requirements are so low that the module can be operated up to 6 months on 2xAA (2600 mAH) batteries. The sensor is operated in pulse mode, measuring the actual concentration of gas during 1 second with 20 seconds intervals. The sensor module is equipped with buzzer and diode indicators and these are activated according to the set alarm levels. In the normal state, the green LED is blinking as an indication that no significant gas leakage is occurring. For the alarm levels indicating gas leakage, the LED is turning red (blinking/continuous) and there is an audible sound from the buzzer. In addition to visual and audible communication, the module allows to monitor the operation using RS232 communication. The measurement data are transmitted via an USB port every 21 seconds. The RS232 communication channel can also be used to calibrate the sensor and to set the concentration for the first alarm threshold. 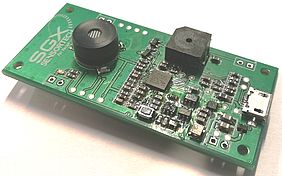